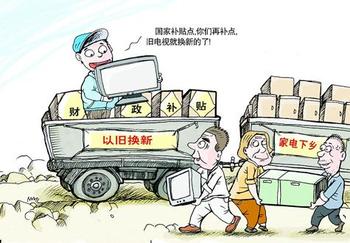 Experts: To put pressure on consumption growth in the short term, the new policy should be introduced as soon as possible
At the end of this month, the policy of home appliances going to the countryside that lasted for more than five years will all expire. At this point, at the time of the outbreak of the world financial crisis, China's intensive series of subsidy consumption policies have all come to a close.

According to a number of reporters from the "Economic Information Daily" reporter, the road to promote consumption policies has been changed this year. In terms of stimulus policies, it may be difficult to reproduce the large-scale central government subsidy policy. Instead, places with more financial resources adjust local conditions to local level encouragement policies. . In addition, as subsidies are diluted, more emphasis will be placed on improving the consumer environment and increasing consumer income.

Industry experts pointed out that the fading out of fiscal subsidies in the consumer sector will form a significant pressure on consumer growth this year, and consumer fears will encounter a Chinese-style â€œfiscal cliffâ€. Experts have called for expanding consumption policies to increase implementation, consider ways of subsidies, tax reductions, and other ways to promote consumption. Long-term policies that increase residents' income, reform income distribution systems, and improve the consumer environment should also be launched as soon as possible.

At present, the nationwide consumer subsidy policy still being implemented only has policies and measures to promote the consumption of energy-saving home appliances and other products. On May 16, 2012, the State Council's executive meeting decided to arrange financial subsidies totalling 36.3 billion yuan to support some home appliances, energy-saving vehicles, energy-saving lamps, and high-efficiency motors that meet energy conservation standards.

The reporter of the "Economic Information Daily" was informed that the previous industryâ€™s call for continued home appliances to the countryside, cars to the countryside, and trade-in has been relatively high. Representatives of household appliances and automobile industries, and some local provinces and departments have repeatedly expressed the hope that they will be able to continue the expiring encouragement. The policy, but after consultation and comprehensive consideration by a number of relevant ministries and commissions, the decision was eventually cancelled after the expiration date.

After the appliances go to the countryside and so on, they will not continue after they expire. Will there be an alternative policy to continue? This is also the biggest concern in the industry and consumers.

The data shows that the growth rate of fiscal revenue in 2012 was significantly lower than the same period of last year. From January to November, the cumulative increase in national fiscal revenue decreased by 14.9 percentage points from the same period of last year. In 2013, the growth of fiscal revenue will remain relatively low, and the contradiction between fiscal revenue and expenditure is very prominent. Therefore, although relevant departments have promoted the consumption of the New Deal for a long time, according to interviews with reporters from various parties, it may be constrained by the pressure on revenue growth this year, and it is difficult for the ministries and commissions to reach agreement on the issue of interest coordination. Change: In the aspect of stimulus policy, it may be difficult to reproduce the large-scale central government subsidy policy, and instead it is a place with more financial resources to arrange local level incentive policies according to local conditions. In addition, as subsidies are diluted, more emphasis will be placed on improving the consumer environment and increasing consumer income.

For example, the Beijing Municipal Commission of Commerce and the Beijing Municipal Bureau of Finance launched the "Credit Consumption Subsidy" on September 25th, 2012. Businesses that directly carry out credit consumption to consumers will receive a 2.5% subsidy from the government, and 30 million will be distributed during the year. Yuan is expected to boost credit spending by 1.8 billion yuan. Beijing also piloted the trade-in policy for furniture in November. It is reported that Anhui Province is also considering the introduction of a provincial-level home appliance auto consumption subsidy policy.

Subsidies have a very significant effect on consumer "inciting", as can be seen from various public figures.

In addition, the â€œrenewal of oldâ€ policy has also played a significant role and has promoted the upgrading of consumption. During the period from 2009 to 2011 when the â€œreplacement of household appliancesâ€ was implemented, the central government allocated a total of 32 billion yuan in subsidies. According to the statistics of the Ministry of Commerce, in 2011 alone, the nationwide home appliance trade-in total sold 92.48 million new home appliances in five categories, driving direct consumption of more than 342 billion yuan. During the period from June 1st, 2009 to December 31st, 2010, a total of 8.15 billion yuan in subsidy funds was distributed to encourage the exchange of 590,000 vehicles.

According to a rough calculation by the reporters based on public data, as of the end of September 2012, during the implementation of the above-mentioned four policies for home appliances to the countryside, automobiles and motorcycles to the countryside, household appliances trade-in replacement, and car replacement, the central government's funds for subsidies have reached 152.45 billion yuan.

Given the huge impetus for fiscal subsidies on consumption, will the decline in the number of subsidy funds from 152.45 billion yuan to 36.3 billion yuan lead to a fiscal decline? In response, Zhao Ping, deputy director of the Consumer Economics Research Department of the Research Institute of the Ministry of Commerce, told the reporter of the "Economic Information Daily" that the negative effect of the series of subsidy policies will be particularly evident in the first year, which means that this year will have an increase in consumption. With no small pressure, this negative impact may last one to two years.

Zhao Ping said that at the end of 2011, the trade-in period expired; before the expiry, the growth rate of household electrical appliances consumption was very high. In January and February 2012, due to factors such as policy withdrawal, the growth rate of automobile and home appliance consumption had apparently dropped and began to â€œdivideâ€. . After the introduction of energy-saving subsidy measures on May 16, 2012, the consumption growth rate of automobiles and home appliances began to stabilize in June and entered an upward trend. This fully shows that the positive correlation effect of stimulus policies on stimulating consumption growth is significant.

In the context of the current decline in foreign trade growth and the still low investment, expanding domestic demand and promoting consumption has become an inevitable choice. The Central Economic Work Conference put forward: â€œWe must firmly grasp the strategic basis for expanding domestic demand, cultivate a number of strong growth points for consumption,â€ and â€œenhance the basic role of consumption in economic growth.â€

In this regard, experts have called for the key to expanding consumer policies. They can consider subsidies, tax reductions, and other methods to promote consumption. Long-term policies that increase residents' income, reform income distribution systems, and improve the consumer environment should also be launched as soon as possible.

According to the reporter's understanding, the future fiscal policy will focus on "adjusting the structure." This year will increase support for education, health care, social security and employment, and increase investment in agricultural water conservancy. Under the guidance of the "structural adjustment" framework, the focus of financial support for "promoting consumption" policies will be in energy-saving and environmental protection products. According to industry insiders, in the long run, the only way to promote consumption is to rely on the strength of the residents themselves, and the final focus of the policy is still to increase the income of residents.

"Expanding consumption is of great significance for transforming the mode of economic development. Real consumption expansion policies should be introduced as soon as possible." Zhao Ping said that immediate consumption, for example, whether the coverage of energy-saving consumption subsidies can be considered to expand, and guide the green field of energy conservation and environmental protection Consumption, it is also conducive to guiding green production through consumption, and then form the sustainable growth of the entire development model. In the long-term sustainable consumption, under the background of the weakening of the subsidy stimulus, the reform of the income distribution system and the construction of a safe consumer environment must speed up the establishment of long-term mechanisms to increase the endogenous power of consumption. â€œIn short, under the condition of limited funds, we must find a most appropriate way to find the most appropriate leverage point so that the policy can be truly embodied in economic growth, consumption expansion, and improvement of peopleâ€™s lives.â€